So... Why was this done? *Pic*
In Response To: Cross section drawing of engine ntxt *Pic* ()

An engine that has the cylinders on opposite banks aligned with each other not only reduces the length of the engine block and (one piece) cylinder heads, but also allows a shorter crank and camshaft, reducing vibration and torsional issues and increasing strength.

The problem is implementing this. The journal end of the rod is more complex.

General Motors used what is called a fork and blade set for their rods. One rod has a bearing cap (actually two), and is called the fork. The other has no bearing cap at all, and is called the blade. The blade is captured in place by the fork. Take a look at the pic of a GM 567 diesel locomotive rod and fork, below. This works on a two-stroke engine because every downward stroke is under power, while the crank pushes up on every upstroke.

This will NOT work for a four stroke engine. The blade rod has to be pulled down by the crank during the intake stroke, and because it is merely held in place by the fork rod, it would lift off the bearing surface, then be slammed back onto it on the upstroke. This increases wear considerably and can break parts.

There are only two ways around it on a four stoke.

One is to have a fork AND blade rod with bearing caps, one inside the other, generally with the total bearing surfaces being the same or nearly the same (the two fork journals would be half the width each of the blade journal). Advantage is an even stroke for both banks. Drawback is wider journal width.

The other is what you see in the Kharkiv model V-2. One rod is pretty much conventional, but has a boss for its own journal, which is basically a wrist pin. The slave rod is essentially a rod with two wrist pin journals. This is much simpler than using two conventional rods, and the journal can be made narrower. Drawback is uneven stroke. This can be ignored with proper balancing, or compensated for with different piston tops to provide different compression ratios, or having different heads (simplified if the right-left sets are not interchangeable). 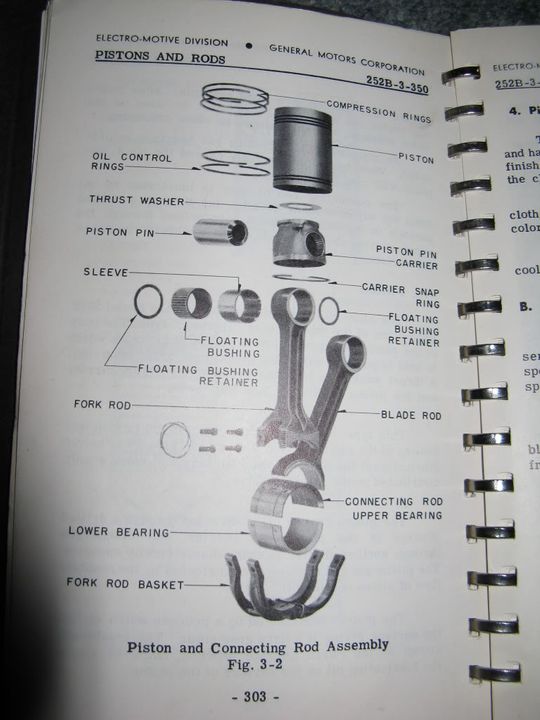