...and Republican *Pic*
In Response To: Election results in my town, democrat ntxt *Pic* ()

A couple of notes:

1. We seem to have twice as many Bernie loving commies in town as we do homo-loving Buttgag supporters. One of my local friends who is openly and flamingly gay is a big Trump fan.

2. I don't think most Republicans realized that they had a primary to vote in yesterday. People seemed to think that the primary was just to choose a democrat candidate.

3. There is a "Charlestown Democrats" club here in town and they have been having meetings to "get out the vote", including going to pick up shut-ins and elderly to come and vote. There is no such Republican equivalent.

4. My 18 year old daughter voted for the first time yesterday. She registered at the polls and in time it took her to fill out the forms, there were at least four other people also filling out same-day registration forms. One of them is someone we know who moved here from the next town (Trump voter). One same-day registration couple looked to be Berniebot hipster types and I suspect they were fraudulent voters because they were filling out the affidavit form instead of producing local ID. In NH, you don't need to have PROOF that you live in the town you are voting in, like an ID, utility bill in your name etc, all you have to do is show some kind of picture ID from anywhere and fill out an affidavit form on which you state that you have moved to town. They snap a polaroid photo of you and stick it to the form...and you go vote. Voter fraud is real. 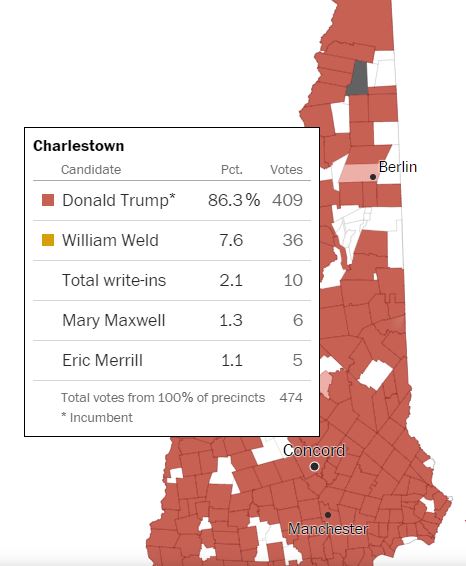